The astrological associations of the tarot are open to lots of debate among authors and readers. The tarot is a symbolic system that holds personal meaning for the individual readers, so there’s lot of room for interpretation. I associate the Death card with Scorpio, and will investigate the sign of Scorpio, the 8th house, and the issues that surround them when this card is drawn. I associate the card Judgement with the planet Pluto. Together, these two cards represent the cycle of endings, transformational power, and new beginnings.

Death becomes the Teacher Card when you realize that coming to terms with death is true liberation. You can then die to those rules that constrict your freedom of spirit. ~ Mary K. Greer, Tarot Constellations 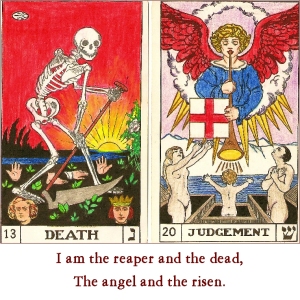 If you have some experience with tarot, you’ve most likely been taught that the Death card is not the harbinger of physical death. It’s a scary looking card ~ and death tends to scare the patootey out of most folks ~ but no one has ever died when I pulled this card. Death does, however, represent the natural end of things ~ work, projects, relationships, and believe it or not ~ even the end of bad habits and hardships. Everything is cyclical, so all things end. Even long-term commitments end through change or by evolving. At least, we can hope that they change because the only alternative is stagnation and, ultimately, true death. Rotting, non-evolving, never ending, eternal stagnation. The last rut.

How long can you hold onto something that has no life of its own or that sucks the life out of you as you try to keep it barely alive? Do you just keep trying to revive it again and again? Sooner or later, you’re going to have to loosen that death grip and let go.

Here’s some good news about the Death card. It’s in the middle of the Major Arcana cards (#13 of 22) because Death is not the end. Based on the meanings of numbers, the card has the base number of 4 (13=1+3=4). 4 represents solid foundations, stability. The skeleton shows us that ~ even when everything else has been stripped away ~ we are left with our basic foundation, our core. We can survive if we find the strength and a sustaining way to rebuild.

The number 1 is the unique spark, the urge toward birth, and the desire to survive. It’s the Sun. 3 is the ability to express oneself and expand ~ Jupiter. 4 is Saturn, the earth, stability, foundation, continuum. And that means growth. Growth is the only alternative. Whatever it is that the Death card is pointing at, craves new life.

There’s a little white thingy in the upper left hand corner of the BOTA Death card. It’s a seed, ready to be planted, carrying all the potential of whatever you will have it become. It’s a seed from the Tree of Life. As long as there’s a seed, a spark, we can go on.

You have to make room for abundance and the only way to do that is to get rid of all the rubbish that’s holding you down. All things end. Go ahead and grieve for what you have to let go. Hold on to what you need to. Bury your dead. Clean house. It’s time for something new. So much more is waiting for you.

Judgement shows us that we will all be called forward again, and not necessarily in “the next life.” It could be today. As Pluto, Judgement insists that we make major changes in our lives so that we may live again.

Suggested reading for the Death card is Hajo Banzjaf’s chapter on Death in Tarot and the Journey of the Hero.