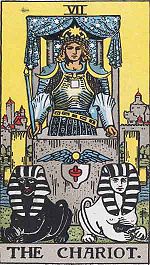 I wasn’t the brightest of students back in the early 90’s. I could not figure out for the life of me what the tarot’s Chariot card had to do with the zodiac sign of Cancer. The chariot looked sort of  like a crab with those two sphinxes looking a little like claws. The starry canopy? Okay, that’s the night sky. The moons on the charioteers shoulders? I suppose they could be the phases of the moon. What exactly is a phase, again?

And honestly, does this chariot look like it’s ever going to make the slightest move forward? There aren’t even any reins! Oh, that’s supposed to be our intuition guiding us? Okay, that explanation will do. I suppose.

But where’s that touchy-feely, mothering, memory-inciting, emotional bent that’s always associated with Cancer? And why in the world is the charioteer a man and a very stern-looking one, at that? I resisted. But this is a feminine sign. I balked. And finally, I just got over it. Every tarot expert associated this card with the sign of Cancer, so I accepted it. Decided to go with the flow. I joined the universal consciousness club.

What I wanted was more of a Moon symbol, though. Oh, come on, I reminded myself. The Moon is the High Priestess card. Isn’t that enough? So, while The Chariot wasn’t a symbol that I really loved, there were enough connections to make it work. But then I learned this:

This is Luna in her chariot from the old Mantegna deck. Why didn’t someone say that Luna had a chariot and she chased the Sun in it?

We can’t know what we don’t know until we know it. Now, I know.

Now, when I pull the card, I immediately think Cancer, The Crab! I can see Luna driving her chariot across the sky. It adds a whole new dimension to my reading. I was finally able see the New and Full Moons in the sphinxes. I recognized the epaulets as the quarter phases and actually knew what they meant. I accepted that Cancers can have a problem with forward movement. (I didn’t mention I have a Cancer sun, did I?) I understood at last that intuition can propel us in the right direction if we will just let go and trust a little. I’ve learned that timing is important. The phases actually mean something ~ in the garden, in God’s calendar, and in our daily lives.

The Chariot also represents the Sun’s ingress into Cancer, the summer solstice, the longest day of the year. It will be nine months until Spring, the season of fresh starts and new births. So I came to understand that this chariot is also the womb, the conception that will be fulfilled with the Sun’s entry into Aries.

While this charioteer doesn’t look to be moving, there’s a lot going on, lives are being made. Cycles will complete themselves, nature will take the reins, and there will be advancement even if it appears we are standing still.

You can see a lot of Chariot cards here.

Some decks with women depicted as the charioteer are:

Duerer ~ This deck shows a woman riding in the back of a wagon with a nursing child. The only deck I’ve found with this symbolism.
Tarot of Prague
Unicorn Tarot
Motherpeace
Etruscan
Goddess
I Tarocchi Dell’Alba Dorata
I Tarocchi dei Visconti

4 thoughts on “Astrological Picture Book ~ The Chariot as Cancer, The Crab”