I never really connected with Diana as the goddess of the Moon. She was too aggressive, a bit too masculine (in astrological terms) to represent the feminine face of the moon. Where was the romance implied by moonlight? Didn’t she ever sleep, perchance to dream? She didn’t have a thing to do with either. For years I felt stuck with this make-do goddess figure to symbolize the Moon. We weren’t a good fit. She was a hunter. I carry spiders outside to set them free. And then finally back in the 90’s I found her ~ Selene, the original Titan Moon Goddess ~ absolutely stunning in her crescent crown.

Greek myth tells us that after bathing in the ocean, Selene carried the moon across the heavens in a silver chariot pulled by white horses. (Now we’re talking.) Eos the Dawn, Selene’s sister, then pulled back the curtain of night so that her brother Helios was allowed to drive his golden chariot across the sky carrying the sun. Selene and Helios were eternally entwined in their chase of light and dark. Now this was what I was looking for in a moon goddess. A story as big as the sky. And then it got even better. 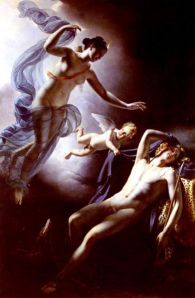 Selene fell in love with the mortal Endymion, an absolutely gorgeous shepherd boy. Selene, being immortal, would never age. How was this affair to endure? Would Endymion age and wither while Selene remained eternally young? Zeus allowed Endymion to choose his own fate to solve this conundrum so he chose to sleep forever, ageless and deathless, forever young and beautiful. Selene seduced him night after night while he slept dreaming only of her. There’s the romance I was looking for.

There’s more to the story, though. Hidden in it is the Moon’s ultimate secret ~ It takes the Moon to satisfy the heart.

“The story of Endymion has a peculiar charm from the human meaning which it so thinly veils. We see in Endymion the young poet, his fancy and his heart seeking in vain for that which can satisfy them, finding his favourite hour in the quiet moonlight, and nursing there beneath the beams of the bright and silent witness the melancholy and the ardour which consume him. The story suggests aspiring and poetic love, a life spent more in dreams than in reality, and an early and welcome death.- S. G. B.” (From Bullfinch’s Mythology, The Age of Fable)

This was the Moon I was looking for, the same one I still search for in both evening and daylight hours. This isn’t the kind of affair we associate with Venus or the passion associated with Mars. This is love that transcends being earthbound, a quest of the heart immortal. This is a dream bathed in moonlight, a dream which keeps us forever young, as beautiful in our 80’s as we were in our prime.

And this is the secret ~ when your Moon is happy, you become eternally young. Hold fast to your dreams, never wake from them. They are so tender, so fragile that they may not survive the light of day. Keep them gently bathed in moonlight and romance, and they will remain your first and truest love.

4 thoughts on “New Moon in Cancer ~ Dream a Little Dream”

Signs and Phases for June 2022